I’ve seen the city on the map, lying halfway between Hannover and Berlin. Over the last 15 years, there’ve been far too many ICE trains along that very same stretch, bypassing the heart of Saxony-Anhalt. Curiosity eventually wins, and I’m on a train to Magdeburg.

Magdeburg is the capital city of the German federal state of Saxony-Anhalt, home to two famous Ottos, a centre for the state’s Romanesque Road, and one of the stations for (Martin) Luther Country. Founded by Charlemagne in 805 AD/CE, the city is one of the oldest German cities, celebrating their 1200th anniversary in 2005. Magdeburg was an important medieval city in the Holy Roman Empire, a member of the Hanseatic League and important trade centre along the Elbe river, a welcome settlement for Jews in the 10th-century, and one of the first places to begin separating church- from civic-rule of law in the 13th-century with the Magdeburger Recht (Magdeburg Rights).

Magdeburg is commonly called “Ottostadt” (the city of Otto) for her two famous sons. Holy Roman Emperor Otto the First turned a country outpost in the eastern lands into one of his favourite palatinate cities and third “holy capital of the empire”, next to Rome and Constantinople. Centuries later, scientist and state official Otto von Guericke brought additional fame to the city with his work in physics and engineering and his time in public service.

Otto the First (Otto the Great)

Emperor Otto the First developed the city into a medieval centre with an archbishop royal court and fortified the city as an outpost against the Slavs on the eastern side of the river and to the south. As Charlemagne was to Aachen, Otto the First was to Magdeburg; Otto’s final resting place is inside the city’s cathedral. As the first of its kind north of the Alps, a free-standing equestrian sculpture was constructed in 1240, most likely a depiction of the emperor. A gilded bronze copy of the Magdeburger Reiter (“Magdeburg rider”) appears in front of the Rathaus at Alter Markt. The original statue is now inside the Kaiser-Otto-Saal (Emperor Otto Hall) within the city’s Kulturhistorisches (Cultural History) Museum. 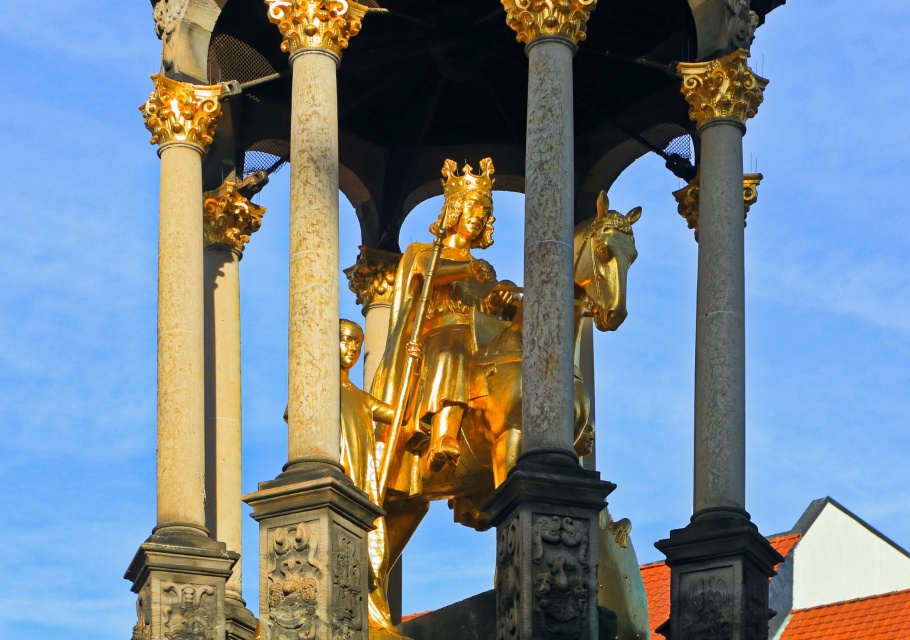 This golden rider at Alter Markt (Old Market) is a copy of the original Magdeburg Rider (c. 1240 AD/CE) that’s safely housed in the city’s Cultural History Museum. With the statue as Magdeburg’s landmark, the figure is likely of Otto the Great (912-973) who was crowned the first Holy Roman Emperor in 962. He helped to make the city an important cultural, religious, and administrative centre in the medieval empire. It’s why the city is also called the “Ottostadt” (City of Otto the Great). Photo on 3 Dec 2015.

Scientists carry out scans and measurements of the city’s famous equestrian statue using non-destructive technology. The Magdeburger Reiter (Magdeburg rider, c. 1240) is considered to be the 1st free-standing equestrian sculpture north of the Alps, and likely depicts Emperor Otto I the Great. Otto’s reign and influence is one of two reasons why Magdeburg is called the “Ottostadt.” Kaiser-Otto-Saal, Kulturhistorisches Museum, Magdeburg, Germany – 2 Dec 2015.

Born in Magdeburg, Otto von Guericke was successful as astute civil servant and equally successful as prodigious scientist. He is known for his famous 1654 “Spheres of Magdeburg” experiment. Two large thick-walled copper hemispheres are put together to form a sphere, and the air inside is removed with a pump. Because of the great difficulty pulling the sphere apart, Guericke’s experiment showed that the surrounding air exerted large pressure against the hemispheres, holding them together. A memorial statue (from 1907) stands in front of the Rathaus (city hall) at Alter Markt square. His 1672 grand work “Experimenta Nova (ut vocantur) Magdeburgica de Vacuo Spatio” is available from the Smithsonian Libraries among many sources.

Magdeburg lies at the intersection for the northern and southern routes of the Romanesque Road in the state of Saxony-Anhalt, highlighting one thousand years of cultural and architectural heritage. The oldest building in the city and a fine example of Romanesque architecture, the restored Kloster Unser Lieben Frauen (Monastery of Our Lady) now houses a museum of contemporary art. The Haus der Romanik (Romanesque House) provides an interactive exhibition of the history, architecture, and culture of medieval Germany. The Romanesque Road is an essential part of the intra-European Romanesque heritage network and cultural route Transromanica.

With initial foundations laid down in the early 11th-century AD/CE and the basic part of the present-day structure in the 12th-century, the Monastery of Our Lady is the oldest building in the city, one of the best examples of Romanesque architecture in Europe, and a focus for the Romanesque Road through the state of Saxony-Anhalt. The former monastery is now home to a small concert hall and the city’s art museum. Kunstmuseum Kloster Unser Lieben Frauen – 1 Dec 2015.

Seven years after the publishing of his theses criticizing the Catholic Church, Martin Luther visited Magdeburg in the summer of 1524 and gave a sermon at the Augustinian monastery (now Walloon Church) and at Johanniskirche (St. John’s Church). Within a month of his sermons, various churches in the city converted, holding Protestant services. Magdeburg would in subsequent years become a pillar of support for the Reformation movement in Germany. Also, the Johanniskirche is where Otto von Guericke is buried, although the exact location is unknown.

When he was 13 years of age, Luther spent a year at a boarding school in Magdeburg. He returned in 1524 to give two sermons, one here at St. John’s Church, which inspired most of the city’s churches to reform to the new Protestant movement within days and weeks. Magdeburg would become a staunch supporter of Protestantism for which the city would pay dearly in the 30 Years’ War. Johanniskirche – 3 Dec 2015.

With the train, Magdeburg is 80 minutes from Hannover (hourly IC service), 75-90 minutes from Leipzig (IC or RE service), and 100 minutes from the German capital city of Berlin with Regional Express RE1 service, serving Magdeburg, Brandenburg, Berlin, Frankfurt an der Oder, Eisenhüttenstadt, and Cottbus. An inexpensive transport option is the Berlin-Brandenburg ticket: in English | auf Deutsch.

•   The city of Magdeburg, in German and English
•   Germany Tourism, in English
•   Sachsen-Anhalt (German) | Saxony-Anhalt (English)

Thanks to Magdeburg Marketing Kongress und Tourismus (MMKT) for providing access to services and facilities throughout my visit 1-3 December 2015, and to Hotel One for a warm welcome and a comfortable convenient stay at Domplatz. I made all of the photos above on 1 to 3 December 2015. This post appears on Fotoeins Fotografie at fotoeins DOT com as http://wp.me/p1BIdT-7Sz.

9 Responses to “Magdeburg: the Otto city where Romanesque meets Luther”