After their stop in town, most visitors depart Rothenburg ob der Tauber with memories of a romantic medieval town that seems almost frozen in time.

But a careful measured walk also produces a deeper examination of the town’s history with clear signs to an historical and centuries-old presence of Jews. A Jewish settlement goes back to at least 1180 AD/CE in written records with the appearance of the name of Samuel Biscopf, a Jew from Rothenburg ob der Tauber (“erste Erwähnung eines Rotenburger Juden”: [ℵ1], p. 136; [ℵ2], pp. 133-135).

The centuries are marked with a growing thriving Jewish community, persecution, violent death, explusion, and a return to life.

•   1180 AD/CE, first mention of Jewish community in Rothenburg; 1st Jewish quarter and synagogue at present-day Kapellenplatz.
•   1250-1286, Rabbi Meir ben Baruch, teaching life and times in Rothenburg.
•   1298, Rintfleisch-Pogrom: 450 Jews killed in Rothenburg; total 5000 Jews dead in Franconia.
•   1339, some of the first set of graves buried at the Jewish Cemetery, at present-day Schrannenplatz
•   1349, Pogrom and persecution, Jews accused of poisoning wells with corpses due to the Black Death.
•   1370, Establishment of 2nd Jewish quarter, around Judengasse.
•   1404, 1st Synagogue converted to St. Mary’s Chapel.
•   1407, 2nd Synagogue constructed close to burial ground, at present-day Schrannenplatz.
•   1520, Theologian Johann Teuschlein incites anti-Jewish hysteria, forcing expulsion of all Jews from Rothenburg. No Jews allowed in the city for next 350 years; 2nd Synagogue and Jewish cemetery destroyed.
•   1861, all Jews allowed to settle anywhere in Bavaria.
•   1870-1875, Jews begin returning to the city.
•   1872, Equality granted among Jews and Christians, after the 1871 constitution of the new German Empire.
•   1888, Prayer hall (“3rd synagogue”) at present-day Herrngasse 21.
•   1875, 2nd Jewish cemetery at Würzburger Strasse and Wiesenstrasse.
•   1938, Rothenburg declared “free of Jews” on 22 October, as last remaining 17 Jews driven out, two and a half weeks before the Reichspogromnacht.
•   1942, 2nd cemetery desecrated and destroyed. Few, if any, descendants of early 20th-century community remain or known to be alive.

The word “pogrom” is a late 19th- to early 20th-century Russian word (“погром”), derived from the verb “gromit” (громи́ть) meaning “to destroy with violence.” While “pogrom” is used generally to describe mob violence by one ethnic or religious group on another, the term is used in this post to describe attacks on the Jewish community.

Beginning in about 1180 AD/CE, the first Jewish settlement was centred here in the area of present-day Kapellenplatz. The historically renowned teacher Rabbi Meir ben Baruch played a critical role in synagogue- and (Talmud) school-life in the mid to late 13th-century. With Jews blamed for the Black Death resulting in the 1350 Pogrom, houses left behind by expelled Jews were claimed by the town. Returning Jews established a new community around Judengasse and Schrannenplatz. By the early 15th-century, the abandoned (first) synagogue had been converted into St. Mary’s Chapel, which itself was torn down in 1805. After complete destruction from bombing in World War Two, nothing original remains at Kapellenplatz.

At the entrance to the building at Kapellenplatz 5 is a bronze plaque to memorialize the presence of Rabbi Meir ben Baruch whose synagogue and school were once at the present location. A leading Talmud scholar and authority of his time, he wrote commentary and poetry, and taught and mentored in Rothenburg ob der Tauber between 1250 and 1286.

In memoriam to Rabbi Meir ben Baruch of Rothenburg, one of the most important Talmud scholars of his time. Born around 1215-1220 in Worms, he lived and worked between 1250 to 1286 at the Synagogue and Talmud School at this present-day square where the first Jewish settlement in Rothenburg was located. He died 1293 in Ensisheim; he was later buried in his hometown of Worms in 1307. From 1404, the Synagogue and Talmud school were converted, respectively, to St Mary’s Church and a shelter for the poor and sick. Neither building survived to the present day.

In memory of Rabbi Meir ben Baruch (2. above), the garden is next to the old Judentanzhaus (“Jewish dance hall”: built around 1400, modified 1613, burned down from bombing 1945, reconstructed 1953). In 1914, Jewish tombstones were unearthed at the old Jewish cemetery (see 5. below); some of these tombstones are now embedded in the garden’s surrounding wall. Hebrew inscriptions on the stones and their German and English translations are found here. On the ground, a memorial in the garden proper commemorates the last number of Jews who were driven out of Rothenburg in 1938.

“Zum Gedenken an unsere jüdischen Mitbürger, die in der Zeit von 1933 bis 1938 aus Rothenburg vertrieben wurden.” (In memory of our Jewish citizens who were expelled from Rothenburg between 1933 and 1938.)

From about 1370, the Jewish community established a second community and living quarter around what is now called Judengasse, or “Jews Alley”. The photo below shows the east end of present-day Judengasse at Am Platzl.

Judengasse, Am Platzl (at the little plaza).

What’s interesting is that Judenkirchhof was renamed Schrannenplatz in 1958. The present site was already known as the Jewish burial ground in 1339, and by 1410, a new and second synagogue had been built nearby. After the expulsion of Jews in 1520, the synagogue was converted to a chapel which itself was torn down by 1561. After 1520, the cemetery was converted to Christian use, and was enlarged a decade later with Jewish graves dug up and their bones removed. When the site was opened for construction in 1914, over 30 Jewish tombstones with dates between 1266 and 1395 were discovered. These stones are presently found in the wall of the Rabbi-Meir-Garden (3. above), the Reichsttadtmuseum (10. below), and the Jewish Museum Franconia in Fürth (about 120 km east-northeast from Rothenburg ob der Tauber).

This barn at Schrannenplatz 16 dates back to about 1783. During the period of exclusion of Jews (1520-1870), all stonework associated with the 2nd Synagogue and adjacent cemetery was considered basic building materials. Not only does the faded inscription suggest a link to the area’s past, but also suggests the desecration of Jewish graves and symbols and incorporation into subsequent construction.

In the final quarter of the 14th-century, Jews returned to Rothenburg and began settling outside the first town wall. The street took on the name “Judengasse” or Jews’ Alley as far back as 1377, and both Jews and Christians lived among another. With cautious painstaking detail to renovation, some 21 buildings remain mostly in their original form, which makes Judengasse the only late-medieval Jewish street to survive in Europe.

The Mikwe (Mikveh) or ritual bath at Judengasse 10 still contains groundwater, but is under private property and not open to the public. A replica of the Mikwe is in the Reichsstadtmuseum. Across from Judengasse 10 is the double-house at 15/17 with two entrance arches resembling two stone tablets for the Ten Commandments. The following two photos at Judengasse 10 and 15/17 are by Tillman2007 (Wikipedia, CC3 license). 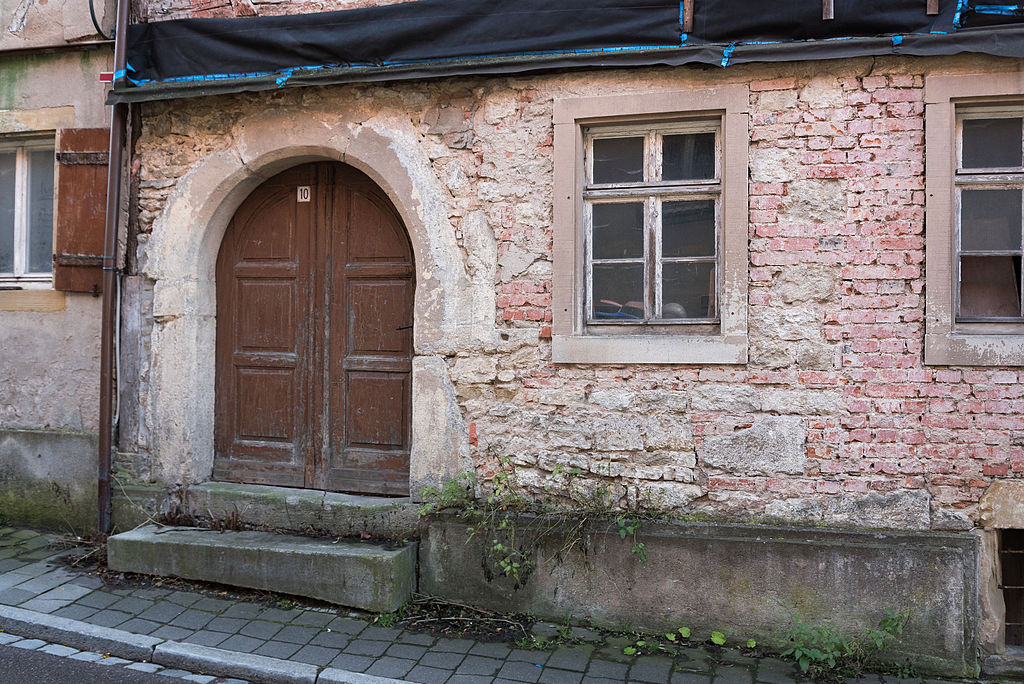 At the west end of Judengasse (at Klingengasse), a memorial plaque commemorates the presence of the Jewish quarter (Jüdisches Viertel), from about 1371 to 1520.

The Judaica collection in the Imperial City Museum contains items related to Rabbi Meir and Jewish gravestones uncovered during construction at Schrannenplatz in 1914 and saved from destruction. Very few items representing daily life in the medieval Jewish community survived to the present-day.

Memorial to the Rintfleisch 1298 pogrom: recovered original tablet with Hebrew inscription; German and English translations in 11. below.

Bronze signet for Jewish community in Rothenburg (“R”), about 1410.

Silver wedding ring in the shape of a tower: Hungary/Bohemia, about 1900.

To mark the 700th anniversary of the 1298 Pogrom, a memorial stone was established in 1998 on the north side of the Chapel of St. Blaise in the Castle Gardens. The original memorial stone in Hebrew is now located in the city’s Judaica collection of the Imperial City Museum; see 10. above. The German translation of the Hebrew inscription goes:

With a bitter soul an equally bitter cry, because we have forgotten about the first persecutions. In their memory I have chiselled onto a stone tablet Rothenburg’s martyrs who were killed and burned because of the uniqueness of God, in the year 58 according to the small counting of the 19th Tamus. And in the castle outside of town, residents forced a conclusion by lighting a fire and killing young and old alike. On the 12th day of the fifth month of the sixth thousand year my job came to an end and on the third day He will come and set us free, my Saint and my Savior. Amen. Amen. Amen.

1298 Pogrom Memorial, on the north side of Chapel of St. Blaise (Blasiuskapelle)

Replica of memorial stone; original in Reichsstadtmuseum (see 10. above), 3/4

Bottom of the memorial, 4/4

In 1888, members of the Jewish community purchased the building at Herrngasse 21. The building found use by the community as a prayer room, school, teacher’s accommodations, and ritual bath (Mikwe, Mikveh), until the Nazis expelled the remaining Jews in 1938.

With their corresponding “Baudenkmal” file numbers, many of the structures above are in the city’s listings of heritage and historical buildings compiled by Bayerisches Landesamt für Denkmalpflege (Bavarian State Ministry for the Preservation of Cultural Heritage); see also Bayerische Denkmal-Atlas (Bavarian Monument Atlas).

The following map shows a recommended 1.6 km (1 mi) self-guided walk with labeled stops and corresponding descriptions and photographs below. The walk begins and ends at Marktplatz near the Tourist Information centre. Click on the “arrow-window” icon at the upper-left corner of the map below for additional details.

Thanks to Rothenburg ob der Tauber Tourism Service for providing access to services and facilities, and thanks to Akzent Hotel Schranne for a warm welcome and a comfortable convenient stay. Except for the two photos at Judengasse 10 and 15-17, I made the photos above on 11 and 12 November 2015. This post appears on Fotoeins Fotopress at fotoeins.com as http://wp.me/p1BIdT-7xI.