Weimar is a compact town with a large number of buildings as a part of two UNESCO World Heritage Sites. As part of the “Classic Weimar” World Heritage listing, Herderplatz (Herder Plaza) in the northern part of the city’s old town is known most for the church with two spires and a dark grey roof. This is the Stadtkirche (City Church), known also the Church of Saint Peter and Paul.

The church dates to the middle of the 13th-century AD (CE) when town and charter were first established, although a settlement in the area goes further back to the beginning of the 10th-century AD. Built initially as late-Gothic and redesigned as Baroque, and what fires and war bombing couldn’t destroy, several phases of rebuilding and renovations were completed in 1953, 1977, and 2000.

Johannes Gottfried Herder (1744-1803) was German philosopher, writer, and theologian. From 1776 until his death, he lived and worked in Weimar as General Superintendent for the Saxon-Weimar Duchy, Court Chaplain, member of the church advisory council, and President of the Supreme Consistory. For his service to the city’s people and contributions to German philosophy and literature, and as the site of his burial, the church is also known as Herderkirche (Herder Church).

The Cranach Altar is an important testament to the history of the Reformation in the state of Thuringia. The triptych was started by Lucas Cranach the Elder in 1552, and continued by his son, Lucas Cranach the Younger, in 1554. Completed in 1555, the entire piece was installed over the main church altar by 1557. The paintings include portraits of Lucas Cranach the Elder and Martin Luther, and centre around “Christus am Kreuz” (Christ’s crucifixion). Christ’s blood streams out and touches Cranach the Elder’s forehead, symbolizing a direct relationship between God and people without the need for or the intercession of priests; more here. 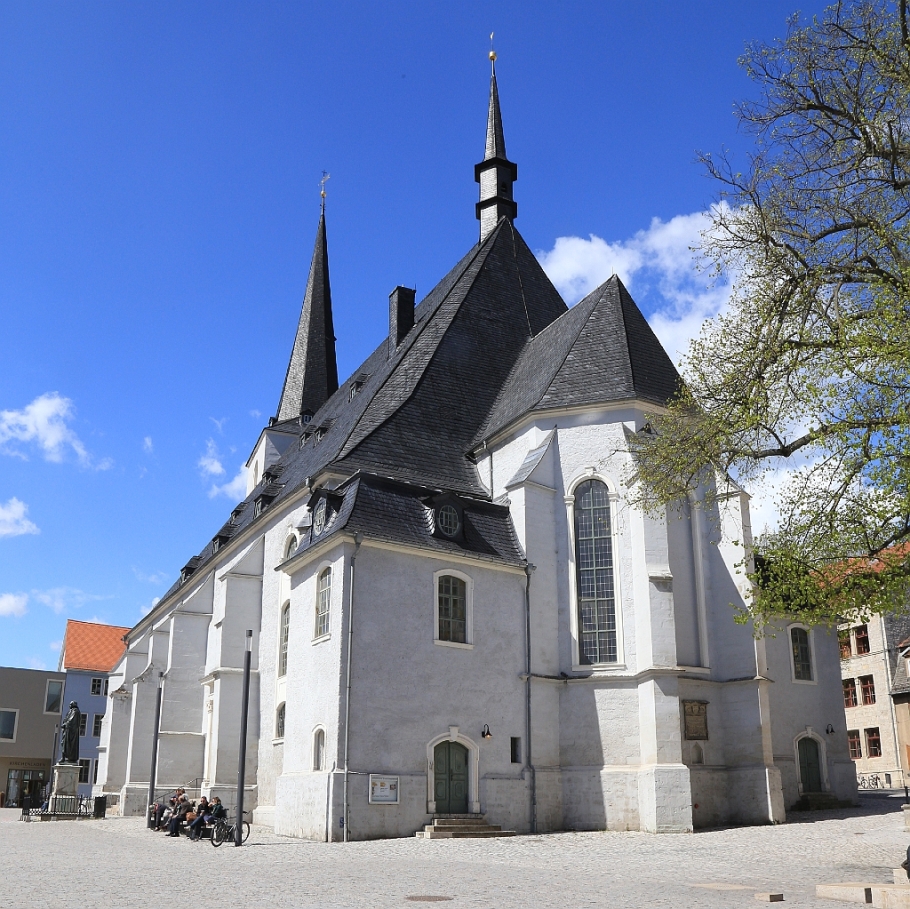 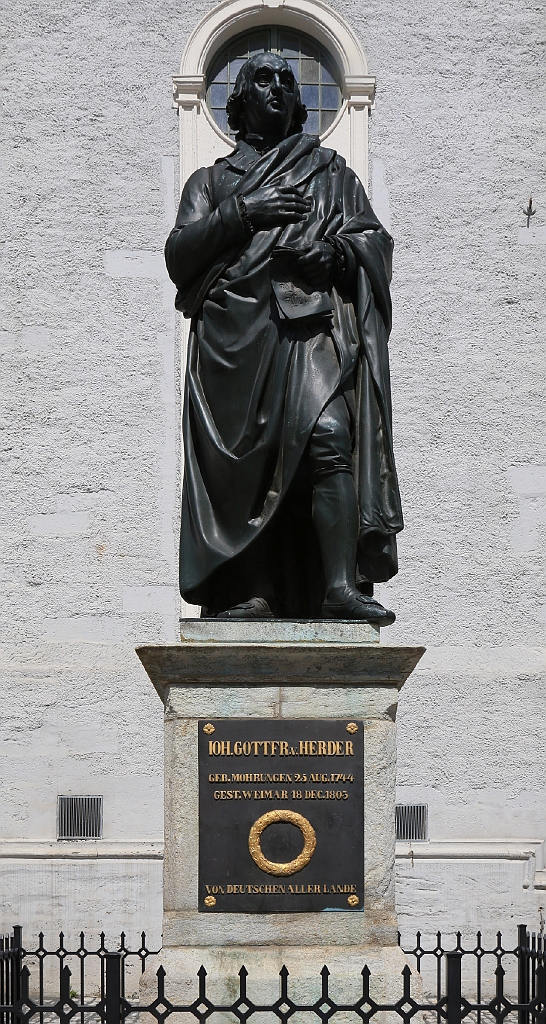 Bronze statue of Herder by Ludwig Schaller; unveiled in 1850 as the city’s first monument to a writer 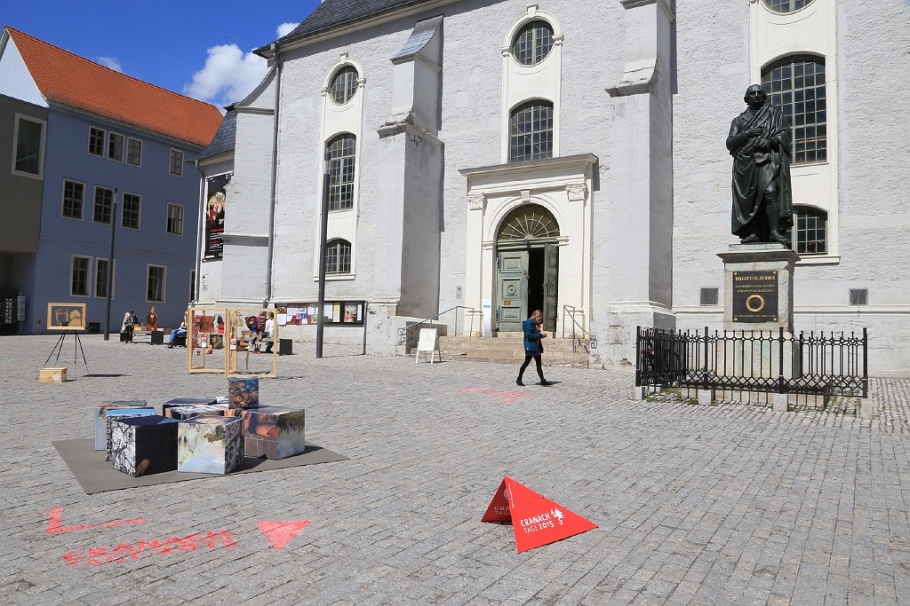 In front of the City Church 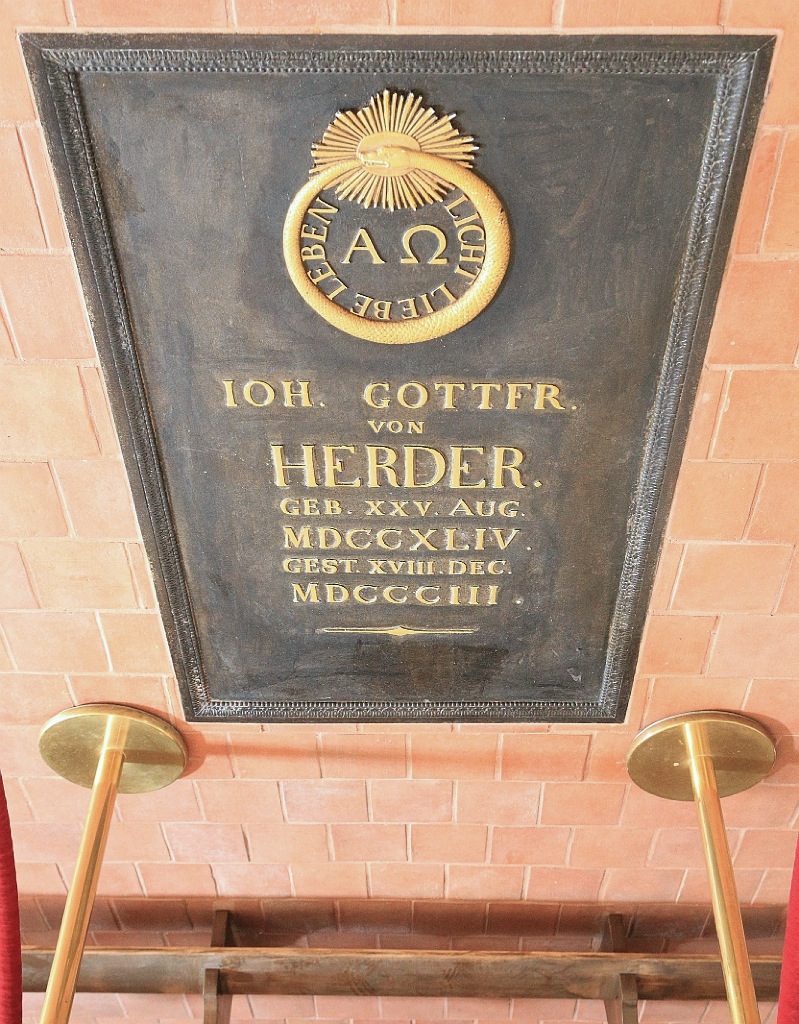 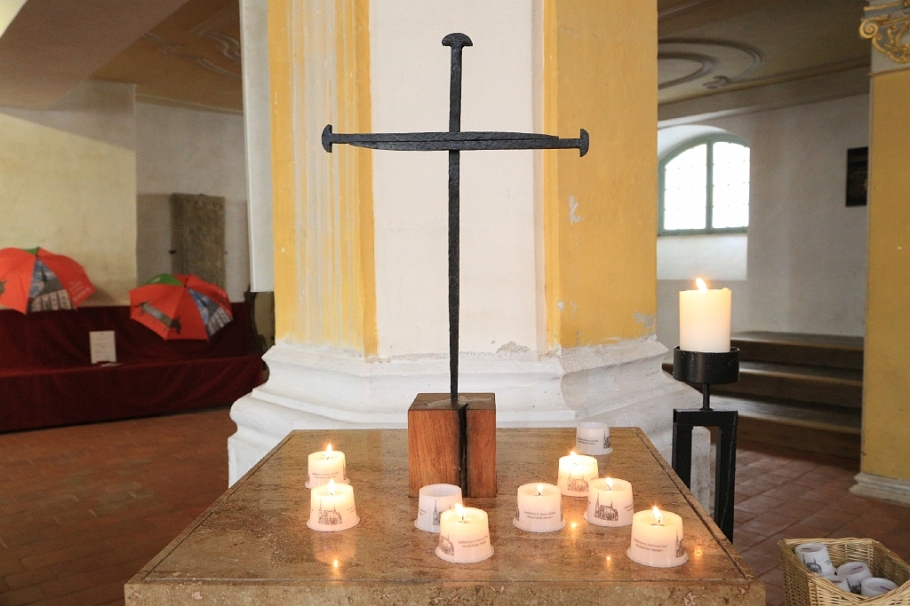 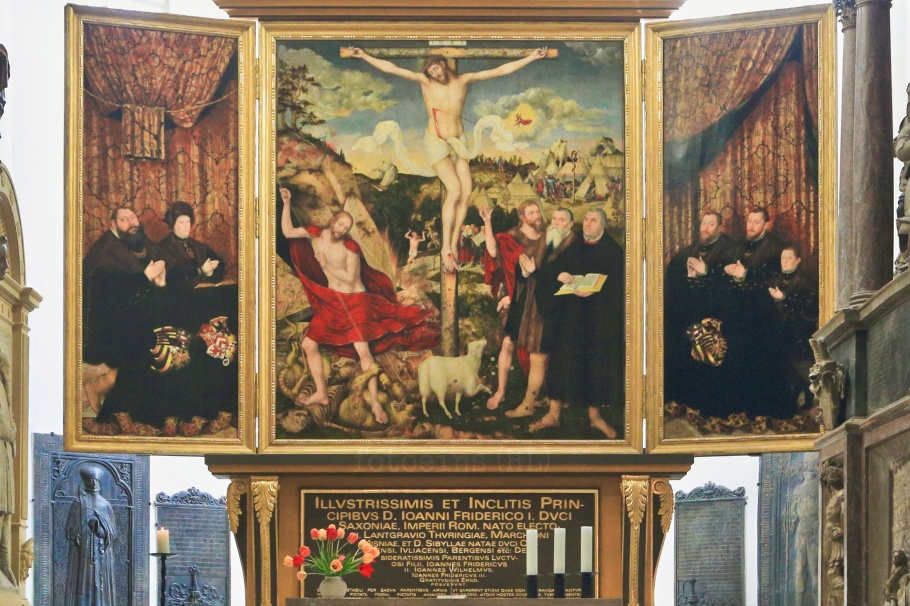 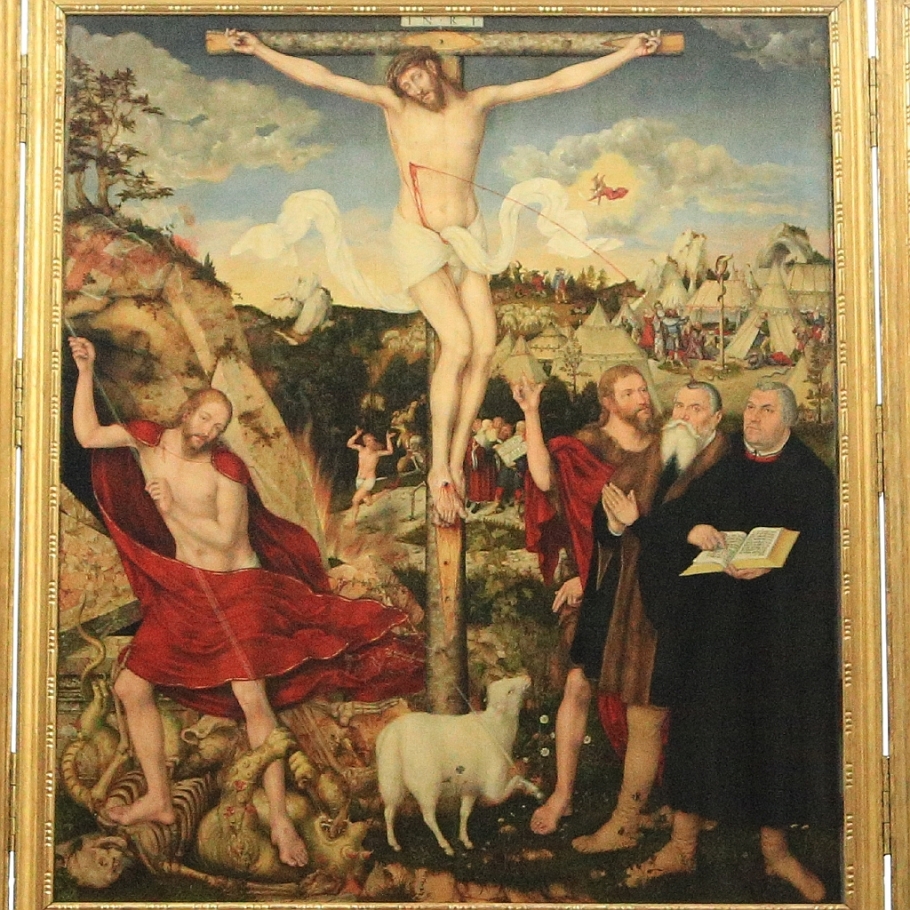 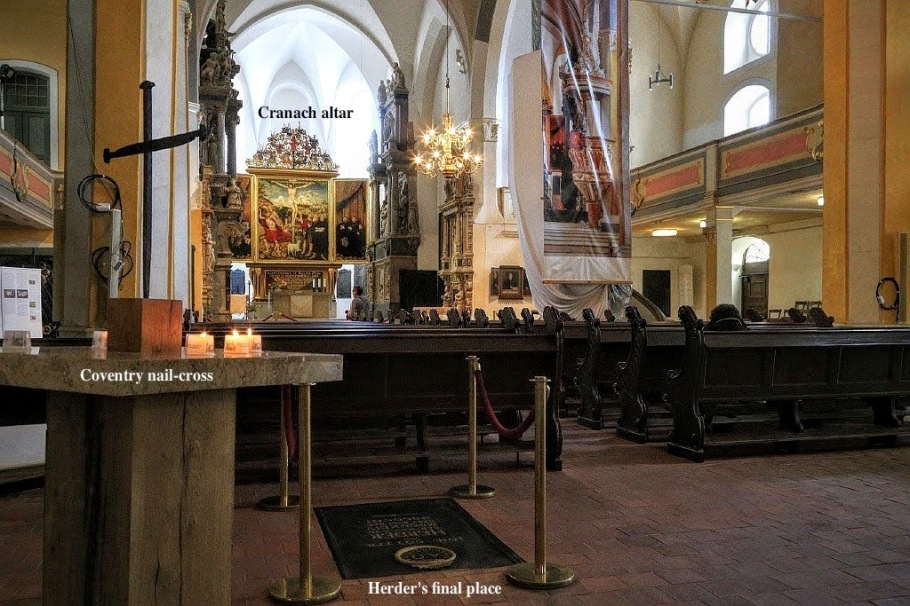 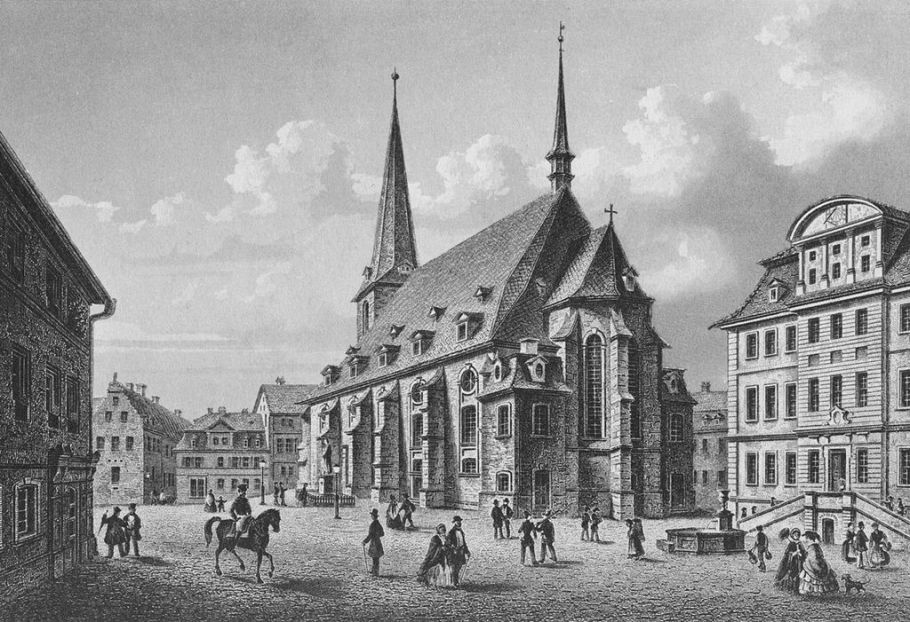 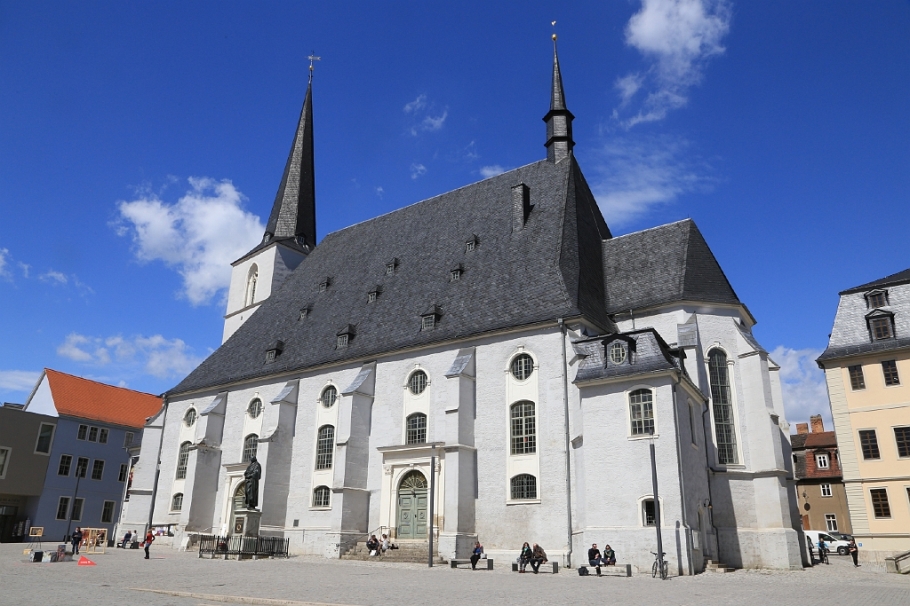 German bombers destroyed the cathedral in Coventry, England, on 1940 November 14-15. Weimar’s City Church suffered the same fate on 1945 February 9. As a part of the reconciliation process, nails from the ruins of Coventry’s cathedral have been sent around the world and reassembled as commemorative crosses. In 2012, nails from Coventry were handed over to Weimar.

More about the City Church and Lucas Cranach

Many thanks to Weimar Tourism, Thüringen Tourismus, Germany National Tourism Board for access to places and activities in the city; and to Dorint Hotel am Goethepark for a comfortable and welcoming stay. Except for the 1840 image by L. Oeder, I made the photos above on 30 April 2015. This post appears on Fotoeins Fotopress at fotoeins.com as http://wp.me/p1BIdT-77L.