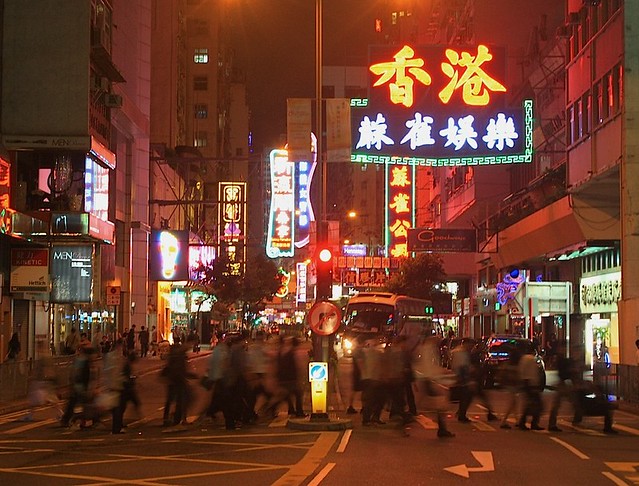 Hong Kong is represented by 香港, or “fragrant harbour”.

Near the mouth of the Pearl River, the city has a very active port with the movement and shipping of trade: by sea, by air, or by surface.

But then, so it is with people: by sea, by air, by rail, and by car. Internationally they come, from Shenzhen, on ferries from China or Macau, or on big planes from Asia and around the world, pouring into the glass halls at Hong Kong International Airport.

A cacophony of sounds comes from all sides at any hour of the day.

Drivers honk their horns, the screech of brakes by trams on the surface-rails, people on their phones in conversation shouting at the top of their lungs.

Seven million people in a relatively small and enclosed space is always going to be about finding new and adventurous ways to defining and redefining terms of individuality and personal space. It’s no wonder why some escape to the New Territories or to the outer islands for a little bit of peace and quiet.

A symphony of lights comes out nightly at 8pm, like a game of neon-sign ping-pong across Victoria Harbour, between Hong Kong and Kowloon.

Bright gigantic lights and signs stream their company, product, or logo. It is hard not to stare.

No sign is too large; some are the buildings themselves. Reaching ever higher into the sky, buildings cannot be ignored at night, their illumination staking out their claims: “we are here, and don’t you ever forget it.”

Smells hit you from every corner.

Cars, trucks, and busses belch out exhaust from their tailpipes. Rotting bins of garbage line up on the sides of alleys. Sweet scents follow you in the Flower Market and from fresh fruit and vegetable stands. Your nose catches that complex whiff of an outrageous blend of aromas from barbequed meat to seafood to dried herbs, fungus, roots, and berries; from egg tarts to noodle soup to smoky temple incense.

It can be inviting, that you cannot help but taste the food that you know you can get from just about anywhere. The smells lure you inside; you may be at a restaurant, a food centre, or a tiny shop by the corner; and you’ll happily tolerate getting squeezed into a table shared with three strangers. You know it’s just right when the world opens up when you take your first bite and slurp of a dumpling or a fried noodle.

It all seems very banal.

I made all photos above in June 2012 with a Canon EOS450D/Rebel XSi (450D) and an Apple 4th-generation iPod Touch (iPT4). This post appears on Fotoeins Fotografie at fotoeins DOT com as https://wp.me/p1BIdT-20G.