I’m pleased to present the following 12 photos from 2012, representing some special memories from the entire year’s around-the-world (RTW) travel.

With my second visit to México City, I finally made my way to Chapultepec, which in native Nahuatl means “at the grasshopper hill”. I also visited the enormous Museo Nacional de Antropología (National Museum of Anthropology), describing in depth and detail the people and history of México. The museum is a must-see for those who love history and wish to understand something more about this fine North American nation. The museum and park are additional reasons why I love the “Day-Effay” (D.F.).

As a long-time fan of baseball, I was thrilled to visit the baseball park in Camden Yards in Baltimore. It’s worth noting that all new baseball stadia have been built with Camden Yards as the standard against which new stadia appear and perform. The old warehouses as the backdrop to centre-right are just as impressive in person as they appear on television.

I always thought people who came back from the Caribbean were exaggerating their descriptions. But with this photo at Junkanoo Beach in Nassau, I began “to sip on the rum,” too, as it were: the skies really are that blue, the water really does look turquoise, and the fine sand really is snow white. I still find it amazing that I went from Camden Yards in Baltimore to the beach in Nassau within 48 hours.

About an hour’s drive southwest from Ho Chi Minh City is access to the Mekong River Delta. That isn’t waste-material; on the contrary, the brown milky waters are due to fertile soil, mud, and silt suspended in the water and flowing out and into the South China Sea. The delta region is a beautiful part of the country, with tiny villages tucked in sheltered coves on islands and along the shoreline, and the presence of shipping traffic as a reminder of the necessity to day-to-day activity and function for people who live and work here.

I arrived in Singapore to visit a number of the Food Centres and eat as much as possible. As you can see, the view from the water in afternoon light isn’t so bad, even if this particular part of the skyline is dominated by the Marina Bay Sands resort complex. Then again, the top of that hotel looks like some space-age landing platform; it might as well be for the cool swanky bar that’s on top.

Across the Kallang river to Marina Bay Sands, Singapore – 3 July 2012. 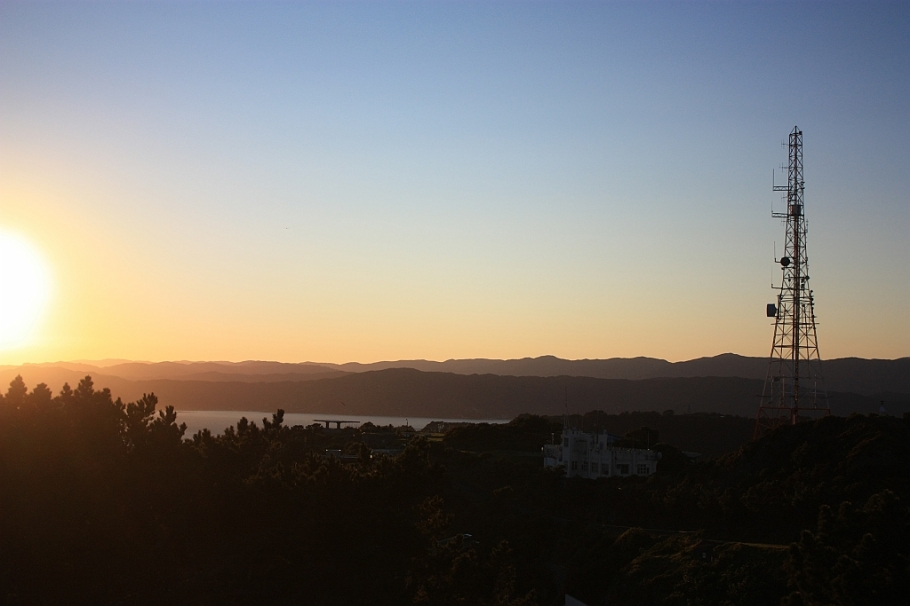 There’s something about getting up in the dark before dawn, and heading out on the first buses of the day, just to arrive on a hill to watch the sunrise. And so it was, with daybreak under clear skies at Mount Victoria in Wellington: crisp, beautiful, and worth the effort of waking up and getting out of a warm bed on a winter’s morning.

I love trains; it might be a slower mode of transport, but what’s sure is having the scenery of both mountains and water, as well as the familiar sounds of the “clickety-clack” accompany the traveler on their journey. Even better is the access to the covered open-air observation car …

People aren’t exaggerating when they say how beautiful Milford Sound and the Fiordland really are. Throughout my three weeks on New Zealand’s South Island in July, I had great luck with excellent weather in the winter low-season. Under sun and decent temperatures, I had little reason to complain, but to be thankful that my time on the South Island is something I’ll never forget.

“OH HAI!” Naturally, there are kangaroos on Kangaroo Island, but you have to admit that this young New Zealand fur seal hanging out along the south-central coast of Australia is both “sweet as” and “cute as”. It’s just the norm with a protected breeding area for New Zealand fur seals.

This photograph is a realization of a wish to watch the sunset over the Indian Ocean. Easily reachable by bus or train from Perth, Fremantle is an interesting place to visit with a UNESCO World Heritage Site in town, museums describing the country’s history as well as the naval history, and great places to eat and drink after sun-down.

Finally seeing Table Mountain and the “tablecloth” effect were a big thrill, as well as the fact that I had just set foot on the African continent for the first time. Four to five days in Cape Town weren’t enough; the time I spent here taught me the lesson that I must come back.

Many would rightly assume that early-November weather in this part of the world would be grey and wet. I’m fortunate that I had a decent afternoon when I set out to walk below the crags to take in this beautiful view of the city, from the Castle on the left (west) to Calton Hill on the right (east).

I made all of the photos shown above; this post appears on Fotoeins Fotopress at fotoeins.com as https://wp.me/p1BIdT-2Sc.