Thanks to the wok from San Francisco’s The Wok Shop, I’ve had a few years of beating down and “seasoning” my cast-iron circular-bottom ear-handled wok. I’ve made the following “chow fun” (炒粉, wok-fried rice noodle) a lot, because the following recipe provides plenty of leftovers, which reheat very well.

On my year of RTW travel, my trusty wok is in storage, but I’ve had occasion to make my chow fun for a number of friends while I’ve been out and about on the road. It was time I put the recipe to electronic form.

If you have time to prep the night-before, chop meat into bite-sized pieces (like for a stew), and put them into a Pyrex container. Dice a thumbnail-size piece or chunk of ginger and toss that into the container with the chopped meat. Add half a teaspoon of soya sauce, a teaspoon of sesame oil, a tablespoon of black-bean sauce, a tablespoon of oyster-flavored sauce, and a tablespoon of sweet chili sauce. Toss in a few shakes of black pepper. Add a few grains of sugar; I find the sugar helps to bind the marinade into the meat a little better. Use a spoon to stir the meat mixture and ensure sure every morsel of meat is covered with marinade. Let rest for at least 15 minutes (if you don’t have time), or have the marinade sit overnight in the fridge. It’s much better for overall flavour to marinade overnight.

On the day of noodle noms, chop the vegetables: onions into small half-circular slices, the peppers into small fingernail-sized chunks, zucchini into similarly-sized chunks, mushrooms into whatever size your prefer. Dice up some more ginger: I make a small mound of diced ginger for every vegetable I fry.

In a fry-pan or wok, add a half- to full-teaspoon of cooking oil. Canola, sunflower, or vegetable oil will do, but I do not recommend olive oil which imparts a very different flavour to this dish.

I’ll fry each vegetable separately : my typical order is onions, mushrooms, zucchini, then peppers. While stir-frying the mushrooms and zucchini, I might put a small dash of pepper and a couple drops of sesame oil to add a little more oomph to each of those vegetables. After frying, you can put all of the cooked vegetables in a single bowl.

Take the marinated meat from the fridge, open the container, and take a whiff – really, take a whiff – that’s some good-smelling marinade. With a teaspoon of vegetable oil, stir-fry those bad boys. Ensuring the meat cooks thoroughly may take some time, given that none of us have restaurant-grade stoves with heaping flames. But I’ve found a decent gas-stove and a good deep wok will remain sufficiently hot to keep the cooking time to a minimum.

During this time (or even while you’re doing the vegetables), open up the rice-noodle stick package, and empty the package into a large pot. Fill the pot with hot tap water (or boiling water) until the pot is almost full. Let sit for about 10 minutes (boiling water) to 15 minutes (hot tap water). I’d empty the pot and refill the pot with tap water. With your cleanly-washed hands, I start “pulling” out the tangled noodle strands. When the noodles becomes just soft enough to chew through and the colour of the noodles turns opaque-white, that’s when the noodles are ready. In my view, you might think it hard to leave the noodle in for too long, but I’ve done it before, and the noodle gets too soft and it gets messy to cook.

Once the meat is cooked, you can choose to take the meat out and stir-fry the noodles separately or fry the noodles together with the cooked meat in the same pan. Whatever you choose, toss in the noodles and add another teaspoon of cooking oil and a half-teaspoon of sesame oil; yes, the noodles will need a bit of oil; otherwise, you’ll get a very sticky bottom of the pan.

Once the noodles turn slightly yellow (“browning”) and are crunchy from the cooking, toss in the rest of the ingredients.

You can choose to have a “dry” or a “wet” noodle. Recently, I’ve tended to a little wetter with a bit of “gravy” that I make on the side. In a bowl, add two tablespoons of corn starch (or ordinary baking flour), and enough water to dissolve the starch. Add one tablespoon of oyster-flavoured sauce, one teaspoon of soya sauce, and one teaspoon (or less) of black bean sauce to taste; the latter is very concentrated and thus, very salty, if you’re not careful, which is why I added the phrase “to taste”.

This is my version of the chow-fun or wok-fried rice noodle, otherwise known as “李炒粉” (Lee chow fun). My version tends to be less greasy and a little drier than restaurant versions I’ve had, but more importantly, I have always made a tasty meal with leftovers for at least another day. 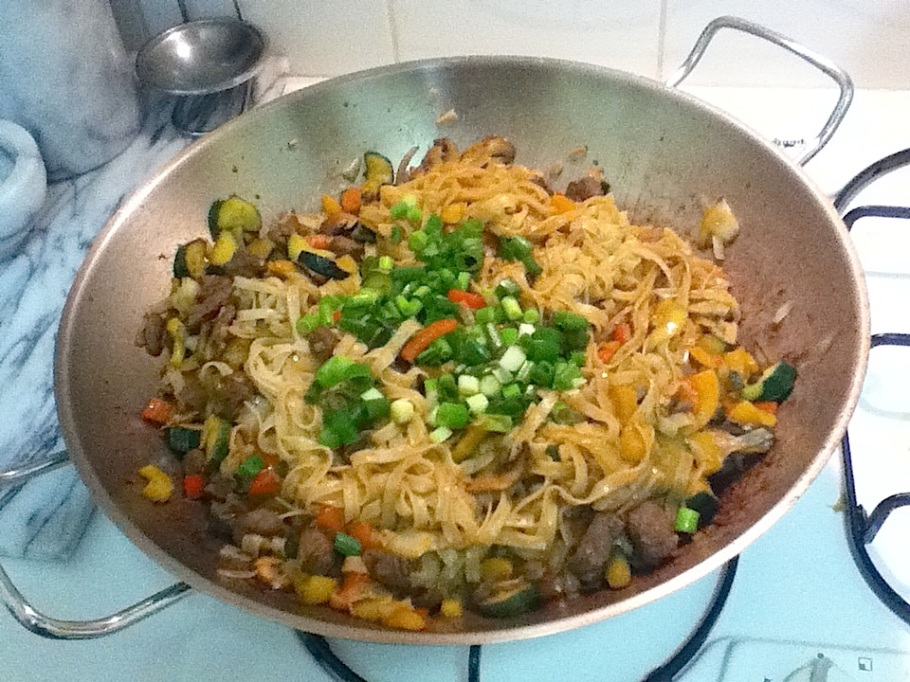 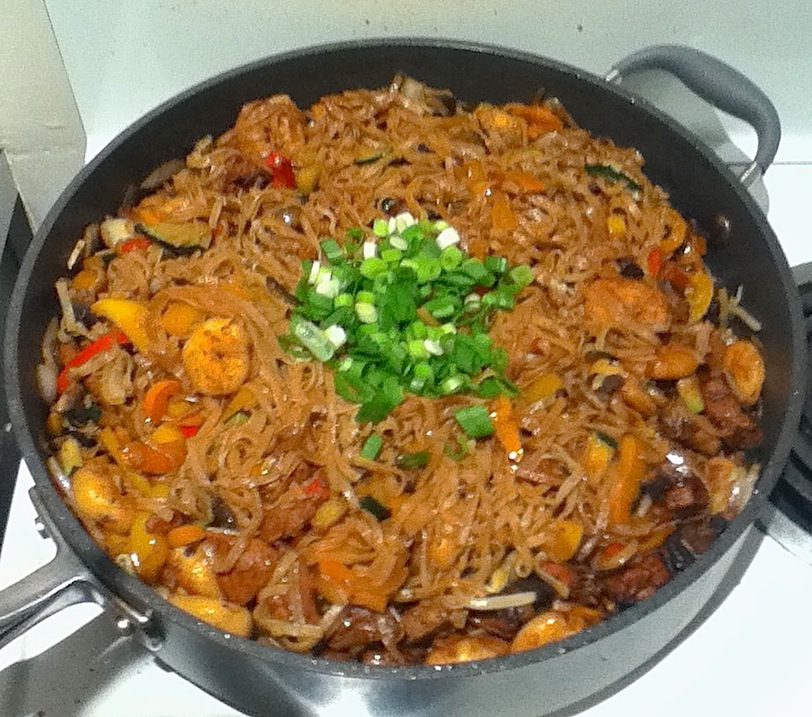 I made all photos above with a Canon EOS450D/Rebel XSi (450D) and a Fujifilm X70 fixed-lens prime (X70). This post appears on Fotoeins Fotografie at fotoeins DOT com as http://wp.me/p1BIdT-1Y5.