In greater Los Angeles, the Santa Monica Pier is a well-described attraction and visited by many. As a boy watching tv-show exteriors and locations from southern California, I’ve always wanted to visit Santa Monica and its Pier. Yes, the Pier is a tourist trap, but I cannot resist either beach or the ocean.

I was staying with friends living in Santa Monica, and on a warm sunny February afternoon, I walked to the Pier in 20 minutes, and spent a number of hours finding the apparent end to highway US-66, admiring the 1909 Santa Monica Pier and the beach, and communing with the Pacific.

The western terminus to US route 66 was for a time at the intersection of Olympic Boulevard and Lincoln Boulevard in Santa Monica, but a more “natural and commercially viable” extension west to the ocean leads to Santa Monica Pier. The latter terminus is more “myth and legend”, partly because an expansive view of beach and the Pacific are more attractive than an ordinary urban intersection#.

I suppose it’s patently obvious but it’s worth repeating: you cannot drive a car onto the end of the Santa Monica Pier. Visitors must park elsewhere, and get their feet walking (or smaller portable wheels rolling) onto the pier proper. And at the end of the pier, one might lean on the wood railing and stare into the waters of the Pacific, and think about where and how far their journey has gone or yet to go: if it’s to mark the start of a Route 66 road trip, if it marks the end of a Route 66 drive which began halfway across the country in Chicago, or if it marks the first phase of a year-long around-the-world trip.

Owner of the “66 to Cali” gift shop on the pier, Dan Rice started movement to replace (in 2009) and promote the “End of Trail” sign.

Mannie Mendelson owned a bait and tackle shop at the end of the pier which became The Last Stop Shop on Route 66. In addition to selling souvenirs, the shop is a small museum and memorial dedicated to Route 66 artist Robert Waldmire.

The Last Stop Shop on Route 66.

A claimed western end of route 66, marked by this “end of trail” sign.

Edge of the pier. 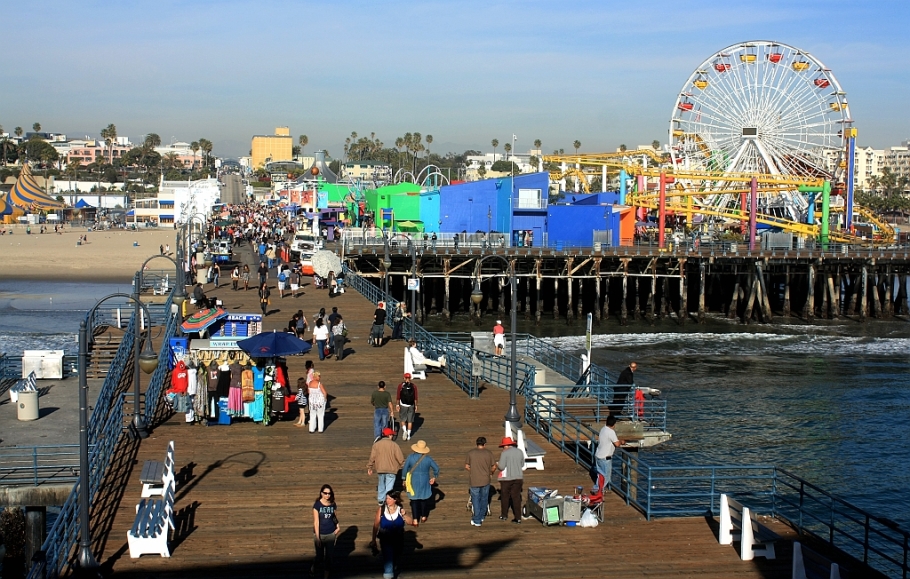 •   My pictures from Venice Beach are here.